After receiving USRA standard twin hoppers and purchasing many thousands more built to the same design in the early 1920's, the NYC and affiliated roads began acquiring larger cubic capacity offset side twin hoppers beginning in 1924. The new design appears to have been developed by the Enterprise Railway Equipment Company, apparently derived from the USRA design but employing the patented offset car side developed by the company.  Built from 1924 until 1927 in five lots, these cars eventually totaled 2,050, a notable, but not significant, portion of the system's coal carrying fleet.  The Big 4 received slightly more than half of the total; the NYC slightly less than half.  As many cars were initially scattered among and within several series of pre-USRA 1660 cuft twins, with those cars later being aggregated into the series shown below, it appears many may have been extensive rebuilds of those earlier cars, despite the NEW stenciling seen in photos.  Such a scenario may also better explain the truck variety seen on some cars. This plan of the Enterprise Railway Company's offset twin hopper design was published in the 1925 CBD.  The NYC 2055 cuft twin differed slightly, one item being that the cars constructed were one inch lower than this drawing specified.

In 2021, Resin Car Works produced a mini-kit to contruct models of these cars in HO.  On this web page, they offered a good deal of additional prototype data, including a NYCL general arrangement drawing, drawings showing both the original K brake application and the subsequent AB refit, and several prototype photos, courtesy the NYCSHS.

S Helper Service produced a model of the NYC system's 2055 cuft offset side twins in the early 2000's by reusing portions of their USRA twin tooling in order to control costs.  Consequently, while the model exhibits many of the prototype's features, compromises were made as a matter of necessity in order to affordably offer a different body style to the limited S scale market.  Chief among these is that, while the USRA standard design results in a top-of-side height of 10'8", and the NYC offset design increased this to 10'11", the model height was not similarly increased.  SHS also utilized their existing PRR 2D-F4 trucks as being somewhat more appropriate for the cars' cast steel side frame trucks than the USRA Andrews trucks also offered by SHS.  Now, as seen in the photo above of NYC 454093, at least some of the cars did come with replaceable journal trucks, those appearing to be some form of L section Andrews with sloping bottom tie bars.  AB brake components and Ajax hand brake were used to represent a car later in its service life; the prototype's initial installations included KD air brakes and vertical brake staffs.  An interesting aspect of the SHS model is that it is an flat molded model, rather than a one piece shell.  This allowed impressive interior detailing with full car side stakes in addition to the common diagonal cross ridge stakes and cross ties.

SHS offered the cars decorated in numerous roadnames to satisfy the market, but the only NYC lines' cars offered were NYC car numbers with the post-1935 "System" herald.  For use on a pre-Depression era layout, the SHS model requires numerous detail changes and a completely different paint job.  Tichy Train Group's past release of a twenties era CCC&StL USRA hopper decal (#10281, shown below,) yields much lettering required for the slightly larger 2055 cuft offsets.  For a re-lettered NYC car from the late 20's up into the 30's, Tichy's #10282 could be adapted, but the concept of these cars being shopped during that period is questionable, though not impossible.  Set #10032, however, could be utilized to assist in lettering a post-1935 car with the System herald, if a modeler chose to undertake some of the detail modifications explained here, as opposed to using the factory detailing and NYC paint job as-is.  More recently, K-4 Studios has offered another pair of NYC and CCC&StL 1880 cu ft hopper decals with a Lines herald.  None, however, duplicate the offset side lettering precisely.

As mentioned above, Resin Car Works offered an HO resin mini-kit for these cars in 2021, with the as-built lettering further offered in 2022.  The gentleman who made the latter decals for that HO project was graciously willing to print me off a set for this S scale car, making the compromises inherent in using the lettering sets described above moot. 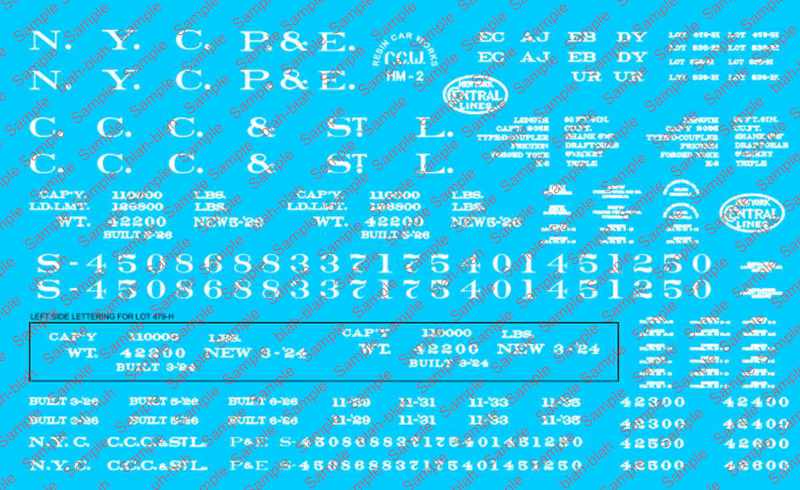 The first step in modeling these cars as they looked when built in the mid 20's is to 'un-detail' the RTR hopper car.  Some of the extraneous parts installed on the car at the factory are relics from some of the other hopper car versions SHS offered, while others represent components that may have been installed over the course of the cars' revenue service life.  I removed the following:

A combination of automotive body filler and styrene rod was used to fill all resultant holes when the detail's post was itself not left behind!  I also chose to remove the plastic rungs of the grab irons on the ends.  For one, the larger plastic rung does not match nor line up correctly with the wire grab irons installed on the car sides; new wire drop end grab irons resolve both issues.  The cars' body bolsters were not redesigned for the offset car, leading to large gaps between the bolster and the wider-than-original car sides.  Styrene strip (.060" x .080") was used to fill these gaps, but the now-incorrectly located rivets were not replaced after being stripped from the bolster.

The SHS model features a die cast centersill/body bolster/cross bearer/draftgear component.  The piece departs from prototype practice in several areas, the result of a combination of model considerations (wide pads for mounting Kadee 802 couplers,) and apparent issues regarding reading trade-standard, underframe drawing practices (they are always shown from the top!)  Regardless, a few modifications can help to bring it closer to prototype as well as accommodate the installation of Sergent couplers within more realistic draft sills.  Accordingly, material was removed at the coupler pads and around the center sill as shown in the image above.  Note the coupler pad/draft sill was thinned to approximately .100" by removing material from the top surface down to the tab at the end that engages into the plastic end sill.  This area was also narrowed to .250" to match the new draft gear that is to be applied.